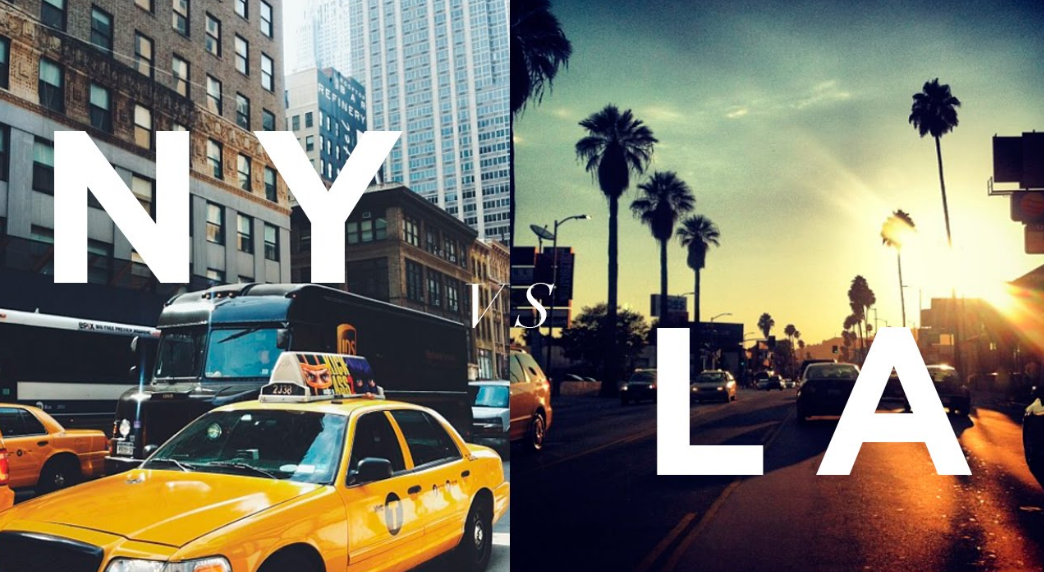 Having recently moved to Brooklyn from L.A., certain differences between the areas stand out.

The most obvious distinction is, of course, the weather. My friends in New York warned me that winters on the East Coast are quite a change from those in Southern California. They were right. Though I’ve been told this current season is mild, the winter clothing here is still unlike anything necessary in L.A. I now own fleece lined leggings and snow boots! And wear gloves almost every day! This is a novelty for someone from an eternally warm place.

Like the nerdy newcomer I am, I immediately took photos the first time it snowed this season, and sent them to my family. I know that for people who’ve had years of shoveling sidewalks and de-icing their cars, winter can be a nuisance. It’s still exciting for a Californian, though. The holiday decorations around the city were also a source of joy – there’s something so classic about walking through a “Winter Wonderland” Manhattan.

Surprisingly, summer in New York was hard to adjust to. I moved here in mid-June, and the humidity was shocking, at least for a person from a desert climate. I recall looking around on the subway last summer, and everyone’s exhausted faces looked just like I felt. It takes a lot of energy to do your daily activities in the midst of that sticky heat. L.A. gets extremely hot, too, but it’s not humid, and you are protected by your air-conditioned car. Growing up I heard, mostly via Sex and the City, that people in New York went to the Hamptons during the summer, and now it makes sense. For those who don’t have a cooler locale to escape to, there are always pool parties.

Speaking of parties, the night life between the two coasts differentiates in one big way. It is the law in California that no alcohol can be sold between 2am and 6am, whereas New York’s policy is that establishments must stop serving drinks at 4am. Since not everyone behind the wheel of a car is as sober as they should be, California’s earlier “last call” seems like a smart move for the driving-centered state. In New York, you can jump on the subway, get a car service, or even walk home, so people often stay out until nearly closing time. Both cities, however, have everything from low key dive bars to exclusive clubs with a dress code.

Though the night life offerings are pretty similar, the overall culture between the two cities is distinguishable. Los Angeles has the largest entertainment industry in the country, so many people there have jobs in that field. New Yorkers work in a wider variety of businesses. This includes film and TV, as well, but also Wall Street, tech, journalism, theater, fashion, and art.

Occupations aside, the two cities are laid out in their own unique ways. New Yorkers have everything right at their feet – restaurants, delis, drug stores, parks, museums, and night life are easily accessible by walking or public transportation. Not to mention, much of New York City has gorgeous architecture and historic buildings. All of this means that the rent is extremely high. The local mentality is “work hard, play hard,” so that both bills are paid, and the cool opportunities available are being taken advantage of.

There are just as many things to do in Los Angeles, but it is a sprawling city, and getting around takes more effort. A person may spend over two hours in traffic going from one side of town to the next, and then there’s the issue of parking once you’ve arrived. As a result, people in L.A. sometimes get the reputation of being flaky. I don’t believe this to be true – it can simply be challenging to get around!

Another aspect that diversifies the coasts is the way people interact with each other. This is a generalization, but the vibe appears to be more relaxed in L.A. Maybe this is due to the fact that daily life is easier with a car and nice weather. A side effect of this is that people seem more careful not to say things that could upset the balance. Some of those in L.A. take this guarded communication style to the next level, where it could potentially read as “fake.” I feel the reason for this is that a particular kind of person moves to Los Angeles to have success in Hollywood: most who do so are brave and prepared to work very hard. Others are a little unrealistic about how difficult it is to break into the entertainment industry, and often “talk a big talk” while trying to mask their insecurities. Again, the majority of people in L.A. are not like this; rather, they are extremely motivated and creative individuals.

When it comes to New York, many people that I’ve met here do not put up with phoniness, or hesitate to speak up when they feel something is wrong. This is where the stereotype of “tough New Yorkers” comes into play, and it is true to an extent. My theory on this is that because the environment is gritty and the weather unpredictable, and because there is not much space to move around, people here have less patience for B.S. This does not mean that they are unkind. Many friends in New York offered to share their homes with me for the holidays, and strangers helped my grandma, who was visiting New York for the first time in over 40 years and probably a little overwhelmed, get up and down the subway stairs. There is often compassion beneath an East Coast person’s straight forwardness, and their honesty is refreshing: you know where you stand.

In addition, smaller details separate the cities. For instance, New York has a rich history, and a lot of “old money” residents. I recently encountered a members-only club that has been around since the 1800s. On a less glamorous note, I am still not used to the sight of three enormous rats fighting over a fast food wrapper, or cockroaches scurrying the streets. And if you want to have nightmares, Google “house centipedes,” creatures I never knew existed until moving to Brooklyn.

Also, in L.A. you most likely purchase your groceries at big markets, like Ralph’s or Vons. Though there are Trader Joe’s and Whole Foods stores in New York, you’re probably also buying food from bodegas in your neighborhood. The living situations themselves are not alike – in Los Angeles, you get more bang for your buck in terms of space, whereas New York is notorious for its pricy, often cramped apartments. People also dress differently: in Southern California, the look is trendy but casual, with many clothes that could also be worn for a hike or day at the beach. Most New Yorkers wear things that are both functional and stylish.

There is a lot of room for individuality here, which makes people watching fun. I enjoy figuring out ways to make my L.A. wardrobe work in New York – I quickly learned, though, that comfortable shoes are key, given all the walking I’m now doing.

I have been on the East Coast for less than a year, and I know there is still much to learn about the way of life here. My feeling, though, is that there is no “best coast;” it is all a preference of lifestyle. Both L.A. and New York have their own incredible things to offer. 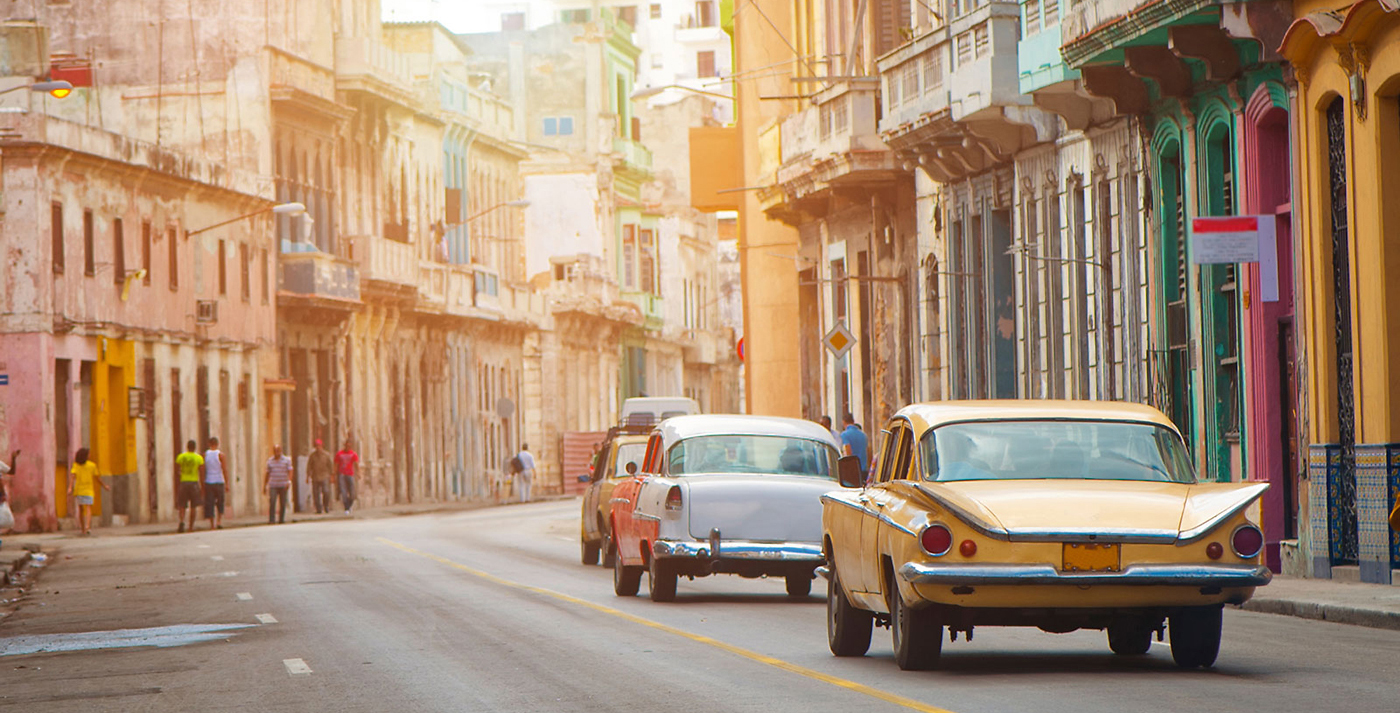 The 14 Must-See Sights Before You Turn 30